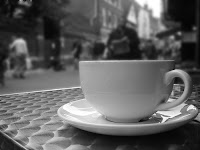 In many ways, I'm thrilled about "My Starbucks Ideas", which provides Starbucks' customers an opportunity to share ideas on improvements for Starbucks.

On the other hand, I wonder if there is an overly optimistic expectation that this approach will deliver amazing breakthrough results. That some folks might be "star struck" with the notion of social computing.

And although this endeavour should drive value such as improved customer relations and incremental innovation, there are limitations (opportunities) that could be used to enhance the environment and ultimate results. To explain the potential, I'll use the engagement model.

Unlike other heralded examples of 2.0 style innovation systems (i.e. GoldCorp, Innocentive), there is no major incentive for someone to provide their ideas to Starbucks. Without any explicit incentives, the motivated respondents will likely be those who are loyal Starbucks enthusiasts. Those willing to go through the effort to establish an ID, and write a description of their idea. Not that they should be ignored, but it does miss out on the opportunities from a more varied set of perspectives that could bring a totally different set of ideas.

So in absence of hard incentives what motivates? How about, what's in it for me (wiifm). It should be no surprise that a good number of the most popular ideas will be about giving "me", free stuff . A quick scan of Starbucks' top 10 most popular ideas show that half of these ideas are about giving me free stuff (whether it's coffee, wi-fi, content). Now who wouldn't vote for free coffee and free wi-fi? I like it!

Although "freeconomics" has been quite a popular topic recently, ultimately, Starbucks needs to understand how this translates into profit. For example, one of the ideas is about giving away free coffee on your birthday. Would this make you spend more money at Starbucks? Would it really make you more loyal? Of course it's popular (voted on), but how can they use this to drive their longer-term business model?

Now what if there was a reward or compensation for an idea that was linked to driving profits? You just might get others motivated to share their insights from a different angle.

On the surface, it appears that customers now have an opportunity to really share their ideas and support their favourite ideas through voting. This is true... to an extent... The opportunity however is only for those that vote favourably on an idea.

The current model only gives the opportunity to vote in favour for an idea. Digg style voting could come in handy for Starbucks if they want to understand the potential downside in addition to the potential upside of an idea.

Although there is much to be learned from the wisdom of crowds in prediction markets, can it really be used to identify 'disruptive' concepts? Clayton Christensen's work on the Innovator's Dilemma explains the challenges organizations face in promoting innovation, indicating that shareholders and customers don't want the disruptive innovation, until it's too late. Christensen's work illustrates how once innovative organizations are "held captive" by their existing customers needs.

I recently wrote a post on Steve Jobs & Innovation that quoted Steve Jobs quoting Henry Ford, which I think is useful... 'So you can't go out and ask people, you know, what the next big [thing.] There's a great quote by Henry Ford, right? He said, 'If I'd have asked my customers what they wanted, they would have told me "A faster horse." '

Also previously posted was a conversation I had with a consultant that had worked with Starbucks. He shared a story about how on the surface Starbucks customers, when asked what they wanted, would reply "faster service, more reasonable (cheaper) prices" but after deeper needs analysis they identified that the real reason customers went to Starbucks wasn't because of faster service, or cheaper prices, it was a luxurious escape they could take in an otherwise hectic day. Reducing costs, rushing the experience, and having a proliferation of stores all went against the "specialness" and "luxurious" concepts.

The point here, is that asking customer is good but they may not have the knowledge/capability to give you insight into the next big thing. Digging deeper to uncover needs analysis or root-value analysis can lead to richer and more useful results.

So, I am certain I've added a little controversy to the great Starbucks initiative. Like I said earlier, I actually think their initiative is a good one. It's not that I dislike what they're doing, I just think the coffee cup is only half full :)
Posted by Rex Lee at 7:32 PM