Social Media and The Speed of Trust 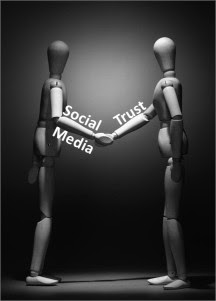 Last month, on separate occasions, I met two friends that I had previously only communicated with via blogs and social networking sites (and maybe the occasional e-mail). Although I knew each of them for some time, it was our first "in-person" meeting.

When we finally met, there was an immediate sense of familiarity. We skipped the usual pleasantries and small talk and jumped right into an open and honest conversation. Thanks to social media I already knew what they looked like, their personality, their interests, their dislikes, their hobbies, their sense of humour, their perspectives, etc.... In fact, I know more about them than some of the people I actually work with on a regular basis.
Why do I find that interesting? Why might an organization want to pay attention?
Trust!
Trust, much like the term "collaboration" is often seen as a fuzzy-wuzzy airy-fairy nice-to-say high-level taken-for-granted leadership concept...
"But of course I trust my people and they trust me".
Do they? Do You? Does it matter?
Yes it matters! It matters if you care about the long-term and about maintaining sustainable collaborative benefit. It matters at individual levels as it does at organizational levels. As Stephen M. R. Covey explains in his book, "The Speed of Trust", those without trust can say and do the right things and people will analyze every word, read into each sentence, and spin your message no matter how much effort you put into perfecting your communication. Those with trust however, can make mistakes and even say the wrong thing and people will overlook it and still support the individual or organization.
Personally, when my team designs collaborative events whether face-to-face or on-line, we spend a good deal of time thinking through the engagement factors. Trust is one of the key elements in the 'motivation/desire' factor .
A lack of trust will cause people to withhold information, to waste effort validating each message instead of integrating, to be less receptive to compromise, and to just be overall less committed, often choosing the least amount of commitment possible. Ultimately this means organizations are, less agile, less innovative, of average performance, and peppered with incomplete analysis.
My first visitor, Betrand Duperrin, author of, Bloc Note de Bertrand DUPERRIN, was able to fly in from Paris to visit me here in Toronto. He was actually on his way to Montreal, where he was presenting at the Webcom conference on the topic of... you guessed it, social computing.
I was able to show Bertrand a couple of our collaboration labs used for face-to-face facilitated sessions. It was a good setting, since, my area of social media focus is on collaboration and borrows greatly from the years of learning & experience our team has gathered from designing and facilitating 1000's of sessions.
We discussed several concepts and shared several stories. I learned even more from Bertrand. There was no, "what is the guy trying to sell me", or "what is this guys hidden agenda". It was as natural as if a close work colleague called me up wanting to talk about collaboration.
Mike Dover who works with nGenera, and avid Wikinomics blogger, was the other person I've finally met after years of digital correspondence. I have to say, there really is no excuse for not meeting earlier considering Mike is actually based out of Toronto.
We finally met at a conference in which Mike was one an MC and organizer. We talked, joked and shared a table at the conference. He even put me on the spot by unexpectedly (at least for me anyways) introducing me, and my blog to the conference attendees. Again, no "posturing" or "small talk". Just open and honest conversation.
How does social media enable trust? Well, Covey talks about 13 behaviours, several of which tie into social media benefits. Here are 3 additional concepts that I'd like to add specifically for those of you in the social media space.
1) Self-Organization - Bertrand, Mike and myself have similar perspectives, and ideas on the power of social computing, and also the limitations of social computing. It's not too surprising that we would eventually meet. The difference though is that commonality and passion around social media, provides a grounds for us to establish a stronger relationship by choice. We choose to engage in these discussions instead of being 'forced' into these discussions because it's our "job".
2) The In-Formal - Mike and I are both Guitar Hero III addicts. In fact, it was a blog post of Mike's that got me started. Without social media, I wouldn't have known that about him. Sure, our paths would likely cross professionally, but he wouldn't have sent a solely professional contact an e-mail dedicated to how he mastered another song on GH3. But he might provide that info on a Facebook status. The in-formal knowledge we have of people makes people seem more like... yep, real people! It shows more of their personality and aids in developing trust.
3) Interaction - Social media provides a two-way opportunity to communicate across time and space. An organization that embraces this is demonstrating that they value the thoughts, and ideas of anyone who wants to share them. This "respect" for other's opinions encourages trust because trust is a two-way thing. It's hard to trust someone that chooses not to listen or respond.
So, please leave me a comment and perhaps we'll find a way to collaborate. And for those of you who were at Talent 2.0 conference in Toronto... Yes it's true... I am a FAR better Guitar Hero 3 player than Mike. :)
Posted by Rex Lee at 9:31 PM

Thank you for the time you me...

Of course I can't agree more with what you say. Another point I noticed about our common views is about defining collaboration as solving problems together.

At last, this is the proof of social medias side effects : even if it was the first (and I hope not the last) time we met, it was like we already knew each other, which made it easier enter in a trustful and open conversation, something that's sometimes not obvious for people working in the same company and are supposed to make business together. Perharps they miss the appropriate background and framework ? ;-)

I was also writing something on our meeting. Hope the english version will be available this week..

Great post, I just finished reading that book as well.

This discussion is interesting to me within the context of the value of social media within the enterprise, a growing debate.

Trust (lack of) is a major barrier within and between enterprises and anything that can be done to foster trust has to be a good thing so maybe this is the key benefit investing in enterprise social media can and should play? In a in-person conversation Robin Harwood of NESTA raised the lack of trust as a key issue when trying to bring together businesses to collaborate in their open innovation programs, particularly when IP is an issue. Although social networks will not solve the IP issues maybe they can be positioned as a tool to help build the personal trust necessary before embarking on projects like this? Alternatively, maybe the project’s need to rise (phoenix-like) from the social networking rather than be ‘forced’ upon the participants by the corporations? There are too many project’s happening today where there is insufficient trust ‘capital’ to succeed but the project will meander to relative failure rather then facing the facts and accepting that without sufficient trust it cannot succeed? Glad to have stumbled across you…Brendan.

I like transposing Covey's book to social networking. I'd enjoy your taking it all the way through Covey's 13 behaviors - I think you've got something more to say here.